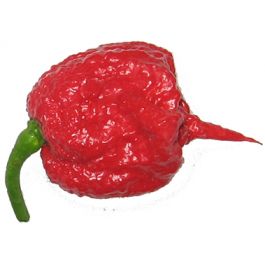 The Carolina Reaper — the world’s hottest chili pepper in 2020

For the last few years, the Carolina Reaper has reigned as the world’s hottest pepper, registering a mouth-scorching 2.2 million SHU (Scoville Heat Units) But some new additions have made the 2020 list of the world’s ten hottest peppers.

These include the Ghost Pepper (Bhut Jolokia), the first pepper to test scientifically at more than one million SHU. Though the Ghost Pepper is so hot that India’s military has reportedly used it to make “chili grenades,” it has fallen to number seven on the list.

Other peppers purportedly used as non-lethal weapons include several variations on the so-called “7-pot chili pepper”, (such as the 7-Pot Douglah and 7-pot Primo). The name of these varietals comes from the fact that they are said to be hot enough to spice 7 pots of stew. In Trinidad, they used to make military-grade tear gas and also in marine paint, as the spiciness prevents barnacles from forming. END_OF_DOCUMENT_TOKEN_TO_BE_REPLACED